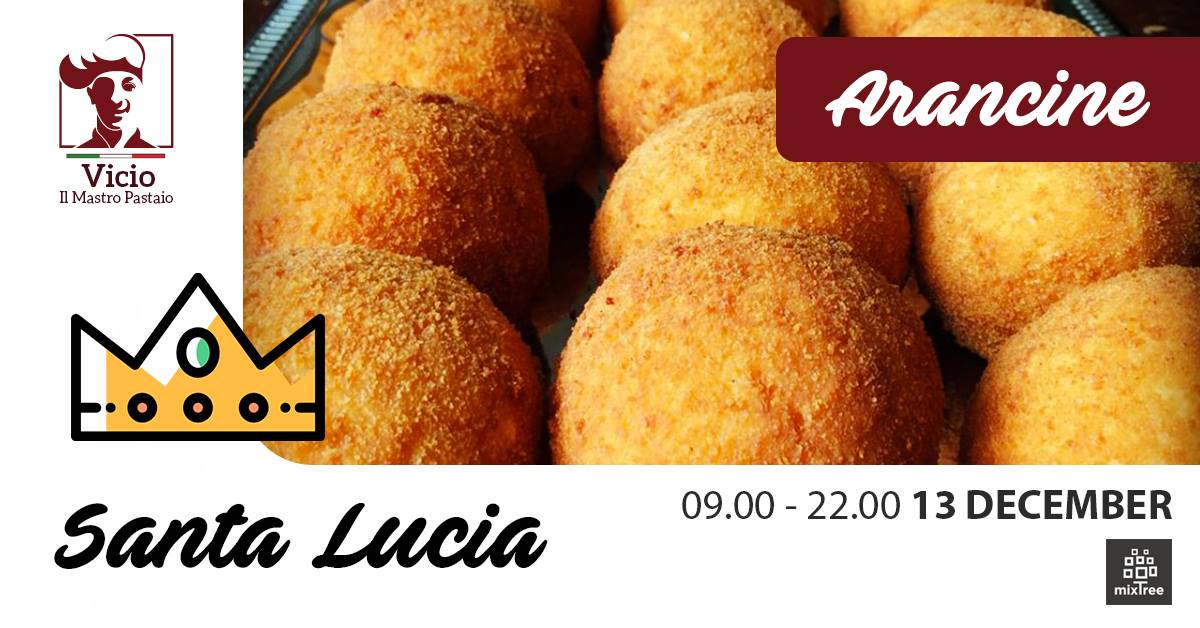 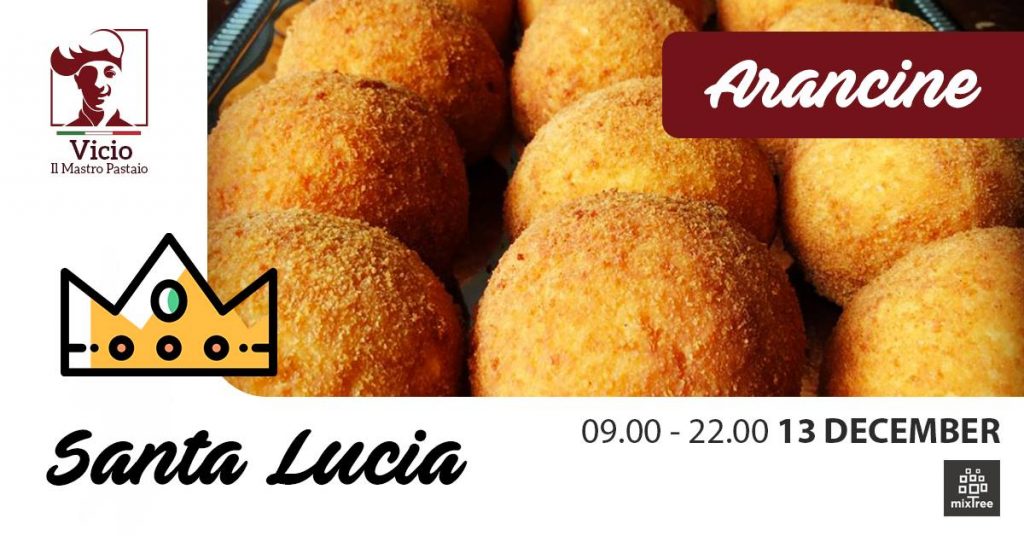 Cari amici 🙂
You can book your food and come and eat it here at the mixtree.
Or “organize your delivery”, we will deliver your food to your home, or your office.
info contanct -06 58738871 – vicio.pastaio@gmail.com

From 7pm onwards, paying a small fee of 5 euros you can enjoy a stupendous display of Brazilian music, a splendid live concert. Look here for more information on the concert

Today is December 13 and for the Christian religion we celebrate Saint Lucia. Sicilians always celebrate the holidays by cooking a lot of extraordinary food. Santa lucia remembers the arrival of wheat in Sicily, and for this event the Sicilians have been busy at prepare simple dishes, but that after so many centuries are still remembered for their extraordinary goodness …. if you want to deepen this story below you will find the full version.
Menu:
What should you expect from our menu today?
– ” Arancini ” Sicilian 220g. (Large fried rice balls filled with Bolognese and peas, or mozzarella prosciutto, or vegetarian with spinach and mozzarella,) .euro 4.50

– Sicilian cannoli and desserts of the day.

Between history and tradition

innfo Between history and tradition:
The Gregorian calendar on December 13th celebrates the day of the martyrology of Saint Lucia, the Syracusan Virgin protector of the eyes, the date of this day, anciently corresponded to the twenty-fifth of the same month, the mismatch between the calendar year and the Julian and the tropic calendar , was the cause of this zibaldone, in fact it coincided with the shortest period of light of the year.
An old peasant proverb says that in Santa Lucia it is “ù jurnù chi ù curtu cà c’é in tuttu l’annu”.
On this day opens the period of slow increase in daylight and announces the end of winter darkness, it is the equivalent of the saying: “The long-running cchiù long who is there”.

The same name Lucia, represents the feminine of Lucius (Lucio) which means “promise of light”, this name given the possibility to the people to invoke it as a protector of sight and health of the eyes.

Among the hagiographic legends written to exalt the Saint by a false analogy of her name phonetically close to the word light, there is one that tells that having fallen in love with her eyes a young local, Lucia, loyal to the dictates of the Gospel where a sentence written by Matthew it is pronounced: if your eyes arouse sin, tear it apart and throw it away, tear off your eyes and send them as a gift to the young lover.
At night, he went to see her at the bedside of his bed, Jesus, who healed her from blindness by putting her eyes in their sockets, more beautiful and sweeter than before.

It is recommended to those who fear the affections of sight, the miracles of any place in Sicily in which they live, in this day they offered former vows of wax, in our time embellished with silver metal, which represented the organ of this sense.

The Saint, patron saint of Syracuse, to whom she was born, and also patron of Saint Lucia del Mela, venerated in various countries of the dioceses of Sicily and in particular of Palermo.
He died in 304 in Syracuse martyred under the persecution of Diocletian, his torture lasted a long time, waned by forces, died in his cell that he never managed to leave except to be torn, his cult, since antiquity spread in almost the whole Christian Church and its name inscribed in the Roman Canon, probably by Gregory the Great Pope from Palermo.
Often in her votive pictures the saint is represented holding a plate, on which her eyes are placed, torn from the jailers, but in the acts of her life that currently exist a similar torture is never mentioned.
The palm, symbol of martyrdom, and the lamp, a metaphor of light, are also rich in meaning.

In Palermo, on this day in which the Virgin of Syracuse is celebrated, a vetustu event is remembered, which the Holy implored by the Palermitans granted granting a port laden with grain to arrive in the port.
The Palermitans tightened in the grip of hunger for several months of famine, did not grind grain to make flour, but boiled it, to feed themselves in less time, adding only a little oil, thus creating the “kennel”.
From that time on, especially in the popular area of ​​Palermo, every year for devotion they solemnly remember the event, strictly resorting to abstaining for the whole day from consuming starchy foods, both bread and pasta, preferring to eat rice, legumes and vegetables, the latter two foods refer to Pitrè anciently in this day were the Palermitan girls who for worship worshiped it and should not miss the “kennel”, this tradition was due to the preservation of enchanting eyes.

On occasion, almost all the bakeries in the city remain closed and, to predominate in the area remain the numerous chip shops, both stable and itinerant, which with their particular trabiccoli reach patrons in every corner, who for the occasion become tormenting with frequent raids where they can feed on “panelle di ceci” and “crocchè”, it is their triumphal day, at one time, they were made only in the days that preceded and followed this festivity (ved.Art.) and, in the many pastry shops.

The latter, from the local monasteries have handed down the use of using the ancient “kennel” which is seasoned with ricotta cream and cinnamon or with chocolate flakes, has turned into an exquisite dessert that is produced only exclusively on the thirteenth of December.

Sweet to taste after a great feast of “arancine” made with the classic ingredient based on rice and, mainly stuffed with a ragout concentrate with minced meat and peas.
For those suffering from a stomach, the beautiful rice ball, similar to a large orange, prefer it stuffed with a handful of butter, the time and the taste to ensure that even this dish is updated with new elements such as vegetables and not case more often than not the spinach is stuffing this tasty delicacy.
At lunch usually the Palermo for not eating pasta refer to the rice that is consumed in “soup” with the association of “sparaccieddi”, which commonly the Italics call broccoletti or “rice in Palermo” where the “timballo” is filled by eggplants that are the masters, but the period is not always favorable, some resort to those preserved or those that today are grown in greenhouses.

Sometimes rice is also the main ingredient to prepare the “grattò”, a stuffed timbale, but in ancient Palermo, the pie is made up of boiled potatoes and made “purée” with the addition of caciocavallo or tuma, associated with local sausages.

Potatoes also have an important role on this day, they are prepared “purée” with the addition of poor ingredients to obtain “crocchè”, but it is the boiled potato that is usually bought by the grocers to be prepared at the salad. .

However for this day everyone is waiting for the kennel, created and packaged according to tradition, but of this tradition there remains only the use of consuming it by the Palermo that for “manciunaria are made or tuornu”, the question of famine during the Spanish domination for sure it does not correspond to historical truth, bought in pastry shops or prepared at home by buying the grain in bulk or packaged by food companies some days before.
The very name “cuccia” comes from a dragging of the noun “cocciu” that is bean, or from the verb “cucciari”, that is to say to eat one grain at a time.
In fact, its preparation is almost a ritual in Sicilian and Palermo families in particular, an ancient custom that comes to us from the now vanished peasant world that during harvest time, the grains of wheat harvested were boiled and eaten on the spot in moments of pause.

A dish certainly very ancient that our Muslim conquerors have handed down to us and, if we made a comparison with some Arab cities like: Tunis or city of Cairo where it is still feasible to taste, still today a Kech or Kesh dish, consisting of boiled wheat sweetened with sheep or camel milk associated with vanilla and cinnamon.
We must soak the wheat for three days in cold water and change it continuously, before cooking it.
The evening before the party, finally put the wheat to cook in a pan, covered with water with a pinch of salt.
Drained well it will be sweetened with ricotta cream, chocolate chips and small pieces of candied fruit and the incorrect orange or chocolate “mouse” or with a milk cream, so prepared was offered to those who make the devotion to the Santa, to family, friends and neighbors.
In ancient times when it was simply boiled, the crumbs were left on the roofs to be captured by the birds